The new ENGAGE newsletter is out and there are two interesting feature articles that I would like to share with you.

I met Marije Vogelzang (who wrote the article) at the Design and Emotion 2006 Conference in Gothenburg, last October, where she was one of the keynote speakers. Her presentation there was probably the least scientific (which she repeated several times herself that day -perhaps because half of the room was filled with scientists? She probably felt she needed to justify her work. Nothing to be ashamed of Marije!). Nevertheless, it was a presentation that was highly appreciated by the attending public… it was filled with wonderful images of food that she designed. Yes, she is a food designer. Wondering what that means?

In the article for the newsletter, she explains.

(pull)Food Design: Designers cannot get closer to people than to make a design that becomes part of the body(/pull)

Through her experience, Marije developed seven ways a designer can approach food and be inspired by it:

The results of her design approach are fun and inspiring. Look at this fun setting for a Christmas dinner for Droog Design (below). Plates were split in half so that people were really forced to share and combine and people were literally hanging in the table cloth. Next to the ordinary cutlery they found a pair of scissors to cut themselves loose. For more examples, go and have a look at the website of Proef .

This article was written by Jettie Hoonhout of Philips Research. Philips does a lot of research on ambient lighting and the effects that light might have on people. We have seen the Ambilight TV already, which is a reasonable success on the market. Jettie now explains the research they are doing on the effects of coloured lighting in atmospheres and our daily environment:

“Despite strong popular ideas about the effects that coloured lighting are likely to have on people, there has been surprisingly little research published on this topic. And the few studies that have been published are quite often contradictory in their conclusions.” 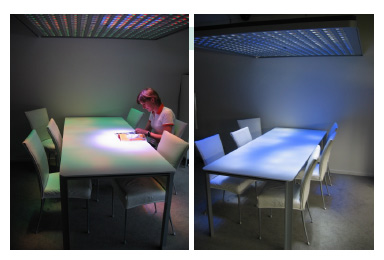 “The concept of coloured lighting for the home and other domains is generally well liked. Most participants in the tests indicate that the lighting devices offer interesting ways of creating appealing and appropriate atmospheres, that will fit different activities and “moods” e.g. activating, or relaxing. However, for reading (and similar types of tasks) participants generally prefer (warm) white light, and quite bright.”