Coca-Cola launches a photo app and social network called Happy Places, with the angle that photo sharing is more about sharing happy moments. The emphasis is therefore on the emotional content and context of the photo. I think it is an interesting concept, but it may lack richness with the mere emphasis on ‘happiness’. 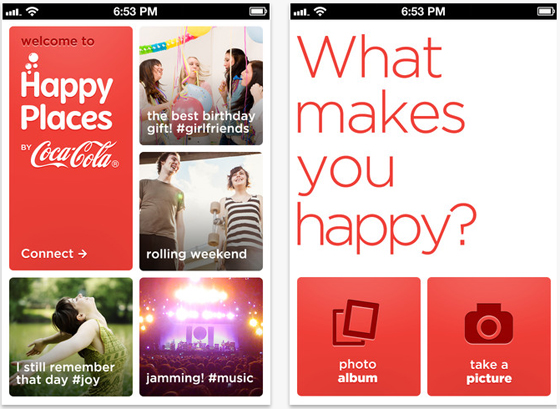 Coca-Cola has long made happiness part of its brand DNA. Now extending that joy into social, the iconic brand‘s Happy Places photo app and social network is encouraging people to share their happy moments with a new photo-sharing social network, Happy Places, and a free mobile app to enable it. The launch comes as Twitter is rumored to be ready to launch a photo filter, a move that Instagram’s CEO says doesn’t scare him.

While the website’s domain name was registered in June it’s not yet activated, although its free iOS app was released November 1st, described as: â€œthat place where you can upload photos of your happy moments, share them, and remember them any time you want. Take a picture or pick one from your albums, add it to your profile, and share that moment of happiness with your followers in Happy Places, or your friends in Facebook or Twitter.â€

Users can view and comment on otherâ€™s pictures and follow hashtags like #music, #joy and #girlfriends to keep up-to-date with new uploads that fit with these “moments.” A earlier version of the app was released for Android and BlackBerry devices.

While it likely won’t make inroads into the Instagram, Flickr and Facebook photo app space,Â AppSide notes that â€œCokeâ€™s mighty marketing muscle and impressive global reach means that it has the ability to reach out to whole new audiences that most photo-sharing services could never even dream of.â€