The Internet has evolved from a source of information to a rich media and social experience. Websites no longer just intent to prevent negative emotions (usability), but intent to delight and engage a user. LEMtool is a web based self-report tool (developed by SusaGroup, researched at University of Twente) to run quick studies to uncover the emotional impact of your website, prototype or visual concept. Now you can start designing for emotion.

LEMtool makes it possible to uncover the emotional impact of a design. You can test sketches, mock-ups, early designs, websites or any other image. In other words: testing at any stage in the design process is possible. With LEMtool it is even possible to evaluate live websites or working prototypes on a password protected location.

Also, have a look at the LEMtool features. Below, I will describe more extensively what science is behind the development of LEMtool.

Optimizing usability is the basis for every great user experience. Apart from the actual usability of a website, there is also the usability as perceived by the user. Several studies indicate a strong relation between perceived usability and the visual appeal of a website (â€œattractive things appear to work betterâ€). This seems to suggest that the main purpose of visual design in any interface, is a functional one, aimed at improving usability.

Indeed, efficient and effective communication with the user through the appropriate visual design of an interface, is a goal most designers seek to accomplish. Nonetheless, visual appeal is not purely perceived as functional.

Research has indicated that there are attributes in an interface that do not necessarily relate to usability, but to the pleasure that a high visual appeal interface might evoke in its users. 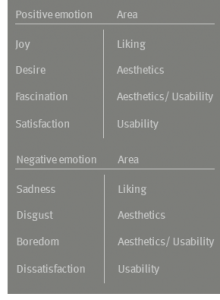 Identifying specific emotions that are most relevant in web- and media experiences helped build a more relevant basis for the LEMtool.

In an experiment using free-response tasks for commenting on website, participants consistently reported most on three areas, namely; aesthetics (visual stimuli pleasuring or offending the senses), usability (perception of effectiveness and efficiency of an interface based on goals and expectations), and liking (an overall judgment of the userâ€™s interactive experiences). Especially the areas of aesthetics and usability are central to the evaluation of interfaces in general.

In the table on the right, you see the final eight emotions and to which area they relate.

Why work with a cartoon character?

The LEMtool has been developed to depict emotions in the clearest, most recognizable way. In order to achieve this, LEM â€“ a cartoon character, has been developed that shows eight caricatured expressions of emotions3. Facial caricaturing (reduction of facial information redundant to the expression and exaggeration of the essential components) has been found to enhance the recognizability of emotions.

Why not add the words to explain the expression?

We deliberately do not explain which emotions are expressed by the character. This â€˜non-verbal approachâ€™ actually adds reliability to the tests. Often, people are feeling similar emotions, but refer to it with different words. With our scientifically validated cartoon characters you surpass the verbal word-significance discussion.
A great benefit of this approach is that it can be used cross-culturally: Between cultures, there are tons of small differences between words that are used to express emotions.

We might feel the same emotion, but call it differently

Our research shows that even though different people use different words to express a specific emotion, they choose the same cartoon character expression because it best represents their felt emotion. This illustrates that these people are actually feeling the same, but merely call it differently.

Recent technological advances have made it possible to measure peopleâ€™s â€˜emotionsâ€™. What these advancing approaches have in common is a focus on behavior (facial expression and bodily gestures) or physiological metrics (heart rate, skin conductance, EMG, pupil dialation). Even though the progress in technology helps improve the used instruments, there are some major limitations, especially in measuring web and media emotions.

More information can be found at the tool specific website www.lemtool.com