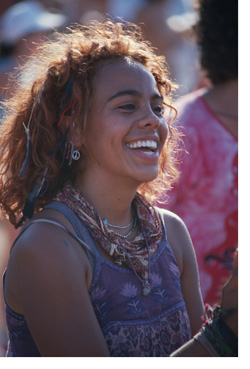 ScienceDaily (Aug. 1, 2009) â€” British psychologist Professor Richard Wiseman (University of Hertfordshire) invites the public to take part in an ambitious five-day experiment that aims to boost the UKâ€™s happiness.Â Participants will first rate their mood and then be randomly assigned to one of four groups.Â  People in each group will watch a video describing one of four techniques commonly used to boost happiness, and use the technique during each day of the study.Â  At the end of the experiment everyone will reassess their mood, allowing the research team to identify the most effective way of making people happy.

Given that people â€˜catchâ€™ the emotions of those around them, it is possible that a mass increase in happiness could prove infectious and help cheer up the nation.Â  To test this idea, the researchers have commissioned YouGuv to carry out a representative poll of the UKâ€™s happiness level this weekend and next, in order to measure any effects of the experiment.Â â€œWe need as many people as possible to take part.Â  It doesnâ€™t matter whether you are young or old, male or female, or where in the world you live, please participate,â€ noted Wiseman.

The experiment begins on Monday 3rd August, and those wishing to participate can visit the project website at http://www.ScienceOfHappiness.co.uk at any time during the five day experiment.Â  The results will be announced on Tuesday 11th August.Â  Â Professor Richard Wiseman has recently written â€˜59 Seconds: Think a little, Change a lotâ€™, a book exposing self-help myths, and presenting scientifically proven techniques that help people achieve their aims and ambitions.

1. Meet up with a friend that you havenâ€™t seen for a while.

3. Exercise for about thirty minutes three times a week.

4. Cut your television viewing by half.

6. Create novel challenges by starting a new hobby, joining an organisation, or learning a new skill.

10. Stop watching and reading the news.

For those who are British and would like to participate in the experiment, visit: http://www.scienceofhappiness.co.uk/

The role of design?

I think this is a very interesting experiment, and I would also love to see a similar experiment being carried out with a special emphasis on how we can design specific interventions to evoke positive emotions and eventually happiness in people’s lives. In the tips that are given above, number 5 is closest to be influenced by design, experience design or service design that is. I am curious what type of experiences increase people’s happiness faster than others. Any suggestions for carrying out a similar design-orriented experiment?