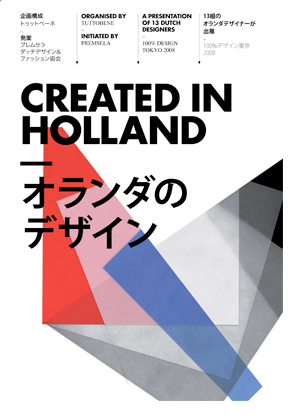 This article is based on the interview I had with Laurens van den Acker and has been published in the special issue magazine for 100% Design in Tokyo “Created in Holland” (by TuttoBene).

â€œIt seems, you have to leave to find out where you are really coming from.â€ In the Netherlands, this phrase could have perfectly been read from a traditional â€˜sayings-tileâ€™ hanging from a nail in the toilet. It could also have been something that a wise Buddhist monk told you while visiting a Japanese temple for spiritual guidance.

This is not the case though. In fact, it is Dutchman Laurens van den Acker, sharing with me the story of his journey to become the General Manager of the Design Division of the Mazda Motor Corporation. Van den Acker graduated in 1990 at the Industrial Design Department of Delft University of Technology and since has worked for Volvo, Audi and Ford, where he became chief designer. For him, he says, it has been more than a privilege to now work in a third different continent. â€œIt doesnâ€™t just give me the work experience, but also life experienceâ€, he explains. â€œI come from the southern part of The Netherlands. When I moved to the north of Holland, I discovered that I really came from the south. When I moved to Italy, I found out that I was Dutch. Then, through Germany I arrived in America and found out that I was European. And now I moved from a western culture to an eastern culture and I am finding out that I am really western. You find out a lot about your culture when you are moving away from your comfort zone.â€

As Van Den Acker immediately left Holland after his graduation, he never really felt part of the Dutch design scene. However, there are some typical traits that he thinks come in handy for any Dutch designer or manager working abroad. â€œWe communicate easily, are pretty straight-forward, tolerant and still, quite democratic. We understand the necessity to build a consensus and are not very authoritarian in doing so.â€ Even though it is known that in Asian cultures building a consensus is of the greatest importance, the Dutch way of reaching a consensus is not necessarily similar or helpful in a Japanese company. Van den Acker explains that this has to do with the fact that in a Japanese culture, the team is more important than you are as an individual. The team speaks with â€˜one voiceâ€™ as they call it in Japan.

This difference with western cultures also influences the design process in an important way. â€œIn a western culture, somebody has an idea, then youâ€™ll have a meeting with the team, and finally show it to the boss, and the boss will say â€˜great, weâ€™re gonna do thisâ€™. Ironically, in a western culture, you are still very reliant upon the boss to make the decision. Then you will go through a really swirly road towards the goal, as the boss will probably tell you lots of things to change or adjust. In a Japanese or eastern culture process, you have an idea, you have a meeting, and before you decide to even speak to the boss, you speak to everybody. You ask everybody his or her opinion and build consensus that way. That process takes a lot of time, which often drives western people crazy. But, once you then come to the meeting where the decision needs to be taken with the boss, he will see that the whole team is on board and it will be very hard for him to say no. And then the road to the goal is straight and short.â€ 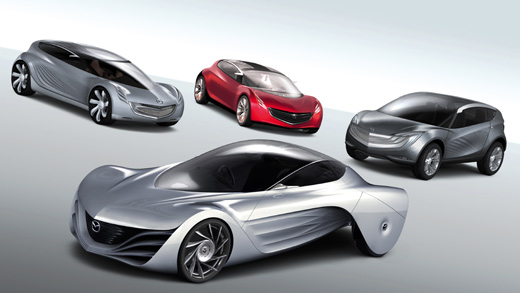 The observation that the brand and the team are the most important in a Japanese business helped Van den Acker tremendously in his first big assignment: creating a new design philosophy for Mazda. Before he did anything, he asked everybody if they wanted to make a big step or a small step. Everybody immediately said they wanted to make a big step. This opened important doors for Van den Acker. â€œIf you can indicate that what you are planning to do in terms of design is the right thing to do, then management is very willing to support you all the way. If you do it because you want to impress your friends, youâ€™re off trackâ€, he states.

The new design philosophy was introduced in 2006 with the launch of the Nagare concept car at the Los Angeles Auto Show. Its name â€˜Nagareâ€™ translates into English as â€˜flowâ€™ and Van den Acker and his designers specifically studied motion and the effect it has on natural surroundings when creating this vehicle. â€œI wanted to create something new with the design team. But make it really communicate what we stand for, and one of the things that we stand for is the â€˜emotion of motionâ€™ as we call it.Â  I said to the team, I need something that expresses motion in a completely new and different way. I looked at what the designers had on the desks, the images that the guys displayed in their presentations, the inspirational images that they had up on the walls. And what striked me was that a lot of what they had was nature, but they were still sketching the same old cars. I said â€˜guys, if this is what you like then I need to see it in the car. So, if you see those lines of nature, I want to see those lines in the bodylines of the car.â€™ And they were looking at me like, â€˜are you serious?â€™ I said â€˜yeah!â€™â€ The Nagare design philosophy did not only feel natural to the designers, but also to everybody that Van den Acker showed the concepts to. â€œI had somebody in the office that I was talking to, and somebody else dropped by and saw the fibreglass model out of the corner of his eyes. He stopped, walked towards the model, set on his knees and touched the body side. He had to feel what he was seeing to believe it. Then I thought, now we have something, when we have people literally touch our cars.â€ 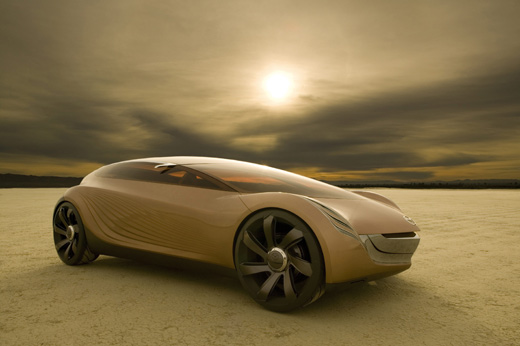 The power of Nagare is that it seems to appeal to everybody, as nature is such a universal concept, and it goes a lot deeper than just aesthetic appeal, as Van den Acker continues to explain. â€œIf we treat Nagare as just a couple of textures on a body side, then it wonâ€™t live a long live. If we treat it as a design philosophy that we are starting to apply to body side surfaces, the details in the head lights, the interior, the choosing of the stitches, the materials, the textures, then it has the chance to become a design philosophy that can live for a generation or so. If we treat it as a true state of mind, then it has the chance to live with us for multiple generations. It will be up to us to get there, and of course, this is my goal.â€ It all seems to feel natural to Van den Acker, who puts his own emotion in motion to make cars that feel natural to all of us.