The wining design in the Nokia Benelux Design Awards 2005 were won by Turkish Tamer Nakisci. The Nokia 888 is a personal mobile communication device which lets you be free and is a lot of fun. It is light, simple and carefree. You can change its form according to your needs during the day. You can carry it anywhere, in any form. You can roll it, bend it, put on your clothes like a clip. It is tryly a personalized product. Getting in touch with the ever changing emotions of people.

I caught up with Tamer by email and received the answers somewhere in December 2005.

Last September you won in the Nokia Benelux Design Awards with your Nokia 888 design. Could you explain shortly what inspired you to design the Nokia 888?

First of all, the way that Nokia chose to present this competition was really interesting and inspiring to me. They used a different website style which they called â€˜oncept loungeâ€™ It was very clear what they were looking for. So thatâ€™s how I decided to participate. Then I took the first step. I looked at the world around us, and was amazed by the fact how deep cell phones get into our lives. Ten years ago nobody knew about them and now they are everywhere, we are almost dependent of them. Nevertheless, they are not just regular technological gadgets. We use them to communicate, to talk to someone, to a person. They are â€˜connecting peopleâ€™â€¦That is a very basic human need. So I came to the conclusion that a cell phone should be able to handle the emotional power behind this. It shouldnâ€™t be just something that we carry in our pockets or purses. It should adapt to us, provide us with new ways of communicating, extend the concept of mobile communication while offering high usability and flexibility in function. That is how I started to design Nokia 888â€¦

The design of the Nokia 888 is highly adaptive and clearly exceeds the current options to personalize oneâ€™s mobile phone by for example changing the front cover. What do you think will be the biggest emotional appeal of your design?

â€˜E-motionsâ€™ are the electronic motions that can be shared between the Nokia 888 users. You can send and receive forms by this function. For instance, you can send a dancing figure while inviting your friend to the party, or a heart shape to your girlfriend. Some shapes, motions give us a certain feeling, remind us of something. So before you read the message, or even without reading the message you can understand what it is about. Is it bad news or good news? This way you use another emotional level for communicating. 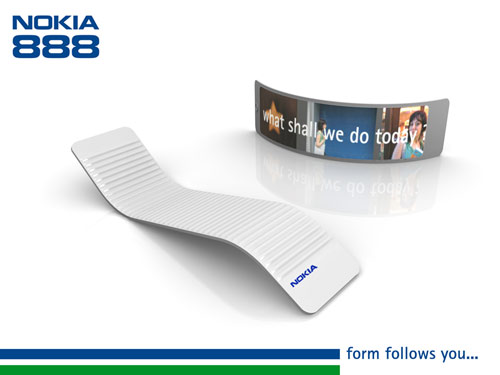 Are human emotions an important factor in the way you decide to design a product? If so, in which way, and how was this for the design of the 888?

As a designer, the human emotion is the first thing that I think about when I start a product. Most of the time the product idea comes out of these emotional ideas. I call it the soul of the product, so without the soul the body cannot survive. This is a very important step for the product design, if you donâ€™t create a strong idea of why this object should exist, what the people will feel when they see it, touch it, then everything else you will built on it will be worthless, and another dull product would come out. In this sense, for my Nokia 888 design, I used the e-motions that I explained before, and also tried to create this feeling of lightness, carefree usage while creating an â€˜electronic friendâ€™ kid of relation between the user and the object. For instance it asks you in the morning; â€˜what shall â€˜weâ€™ do today?â€˜ rather than a simple agenda or reminder. Also while using the navigation function of the phone, it says: â€˜we are here” instead of saying â€˜youâ€™ are hereâ€™. I think these small details create a precious whole in the end.

Do you think the design of the 888 could be implemented now, or otherwise in a year or in some years?

It was a concept design competition, so I tried to generate a concept based on existing or possible technologies, as Nokia had briefed. We donâ€™t have the required technology at the moment. At least, not at an affordable price. But I am very attached to this idea and so is Nokia, as they describe it as a very conceptual but at the same time as a very realistic design. So I think that at least they would be interested to use some of the principals that I offer.

The interface will be a huge challenge but will eventually form the biggest influence the phone has to provoke emotions and build up an emotional relationship with the user. While designing the 888, did you happen to get any ideas for certain characteristics of the interface?

While designing the 888 I tried a lot of combinations and possibilities for the interface, but eventually, I realized that they were creating confusion rather than creating a calm and simple interface. So I decided to push my project to the conceptual side a little bit more and use flexible touch screen. In a future where these technologies that I mention will be available to use for a phone like this, there will be a dozen of accessories or interface devices like Bluetooth pens, earphones etc. which this phone will be compatible with. So I decided to focus on some other areas of the design and leave it open.

Which design of an existing product is the best example of an ’emotional design’ – referring to the emotional appeal of it, to you?

I might not name the product itself but I like Karim Rashidâ€™s works in general. Also the sugar cubes by Droog Design, that have numbers from 1 to 100 written on them. The small touch that completely washes away the dullness of sugar cubes

I read design magazines both in paper and online. I read books, I try to improve myself all the time. But more than that, I observe a lot. I think that is very important. The things going on around us, the small details of life, the nature. So in one second , I realize something that nobody else has seen before out of all these, then I breathlessly get to work and start to designâ€¦

Thank you for this interview Tamer. Good luck with all your future designs!

Leave a Reply to Habacuc