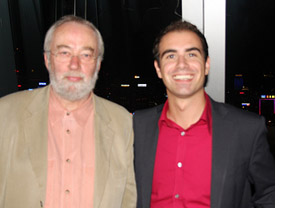 Bill (on the picture with me on the left) is looking forward to his new role as Museum Director and mentions that this role gives him a chance to tell stories about design to a wider audience. “The scope of the job description that got me excited is that it includes the museum itself, with a renovation already underway, and also the idea of creating a â€œNational Design Resource and an International Design Authority.”

The official press release can be read here >>

Moggridge, 66, describes his career as having three phases, first as a designer, second as a leader of design teams and third as a communicator. For the first two decades as a designer, he developed his business internationally in 10 countries, designing high-tech products, including the Grid Compass, the first laptop computer. With the co-founding of IDEO in 1991, he turned his focus to developing practices for interdisciplinary teams and built client relationships with multinational companies. Since 2000, he has been a spokesperson for the value of design in everyday life, writing books, producing videos, giving presentations and teaching.

Moggridge was honored with the Lifetime Achievement Award at Cooper-Hewittâ€™s National Design Awards at the White House in 2009. This award is given in recognition of an individual who has made a profound, long-term contribution to contemporary design practice.

At Cooper-Hewitt, Moggridge will oversee the only museum in the United States devoted exclusively to historic and contemporary design. In this role, he will establish the museum as the pre-eminent national design resource, enhance its profile as one of the worldâ€™s leading authorities on the role of design in everyday life and develop and present exhibitionsâ€”both real and virtual.

Moggridge founded his design firm in London in 1969, adding a second office in Palo Alto, Calif., in 1979. In 1991, he merged his company with those of David Kelley and Mike Nuttall to form IDEO, a global design firm that has transformed design methods and culture. Today, IDEO has offices in Palo Alto, San Francisco, Chicago, Boston, New York, London, Munich and Shanghai.

Moggridge is the author of Designing Interactions, published by MIT Press in October 2006, and named one of the 10 Best Innovation and Design Books of the year by BusinessWeek magazine. The book also includes a companion DVD and Web site (www.designinginteractions.com). He is currently working on a new book due out in fall 2010, Designing Media, which examines the connections between traditional mainstream media and the emerging digital realm.

Moggridgeâ€™s professional activities include those of advisor to the British government on design education (1974), trustee of the Design Museum in London (1992-1995), visiting professor in interaction design at the Royal College of Art in London (1993) and member of the Steering Committee for the Interaction Design Institute in Ivrea, Italy (2003).

He is currently a consulting associate professor in the design program at Stanford University, a position he has held since 2005. In addition, Moggridge served as chair for CONNECTING â€™07 World Design Congress held in San Francisco in October 2007. This event and three exhibitions brought the international industrial design community to the United States for the first time since 1985. Moggridge worked on the planning and preparation for seven years and served as master of ceremonies for the main congress.

Moggridge studied industrial design at the Central School of Design in London, graduating in 1965. After gaining some work experience in the United States, he returned to London to study typography and communications before establishing his consulting business in 1969.