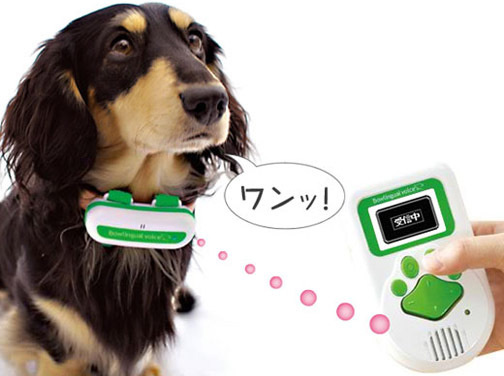 First put on sale in 2002, a new version from toy-maker Takara Tomy is due to be launched in Japan in August and was on show Thursday at the Tokyo Toy Fair. The Bowlingual was developed in collaboration with an audio researcher and analyzes the acoustics of a dog’s bark. It is said to be able to recognize and convey six basic emotions. It consists of two parts: An microphone worn around the dog’s neck and a handheld unit that receives data from the microphone, determines the emotion and then displays a corresponding phrase on the screen for the owner.

The new version has a smaller handheld unit and packs a built in speech synthesizer so it will audibly tell you what you dog is supposedly trying to communicate, in addition to displaying it on the screen. When it went on sale in 2002 the company sold more than 300,000 in Japan, a country where many owners will often spare no expense in making sure their pets are happy. The Bowlingual will cost just under 20,000 yen (US$213), and will initially be available in Japan only. There’s no word on when it might be available outside Japan.

The device is billed as a “translator” but it might more precisely be called an emotion analyzer. It is said to use technology to categorize dog barks into one of six standardized emotional categories. Then, for fun, Bowlingual also provides an often humorous phrase representative of that emotion. But the product package clearly notes that the phrases “are for entertainment purposes only” and it seems that they are not meant to be true translations of each bark.

The product claims to work on any breed of dog with over 80 different dog breeds pre-programmed for easy initial set-up. For mixed breeds, the user must input the type of dog by size and shape of the muzzle.

Bowlingual also has several other functions which vary slightly depending on regional version, including dog training tips, a “Bow Wow Diary,” tips on understanding your dog’s body language, a medical checklist, and a home alone bark recording function.

The device consists of a hand-held receiver, which also acts as the controller and contains an LCD information screen and a wireless microphone-transmitter which attaches to a dog’s collar. When a dog barks, the microphone records and transmits the sound to the hand-held unit for computer analysis against a database of thousands of dog barks. The unit then categorizes the bark into one of six distinct dog emotions (happy, sad, frustrated, on-guard, assertive, needy) and displays the corresponding emotion on the screen. After displaying the emotion, Bowlingual then displays one of nearly 200 cute or humorous phrases which have been categorized to fit within the range of each emotion and, according to the package, “represent what your dog might say, if only it could speak.”